Why Does My KitchenAid Mixer Leak Oil? (And How To Fix It) 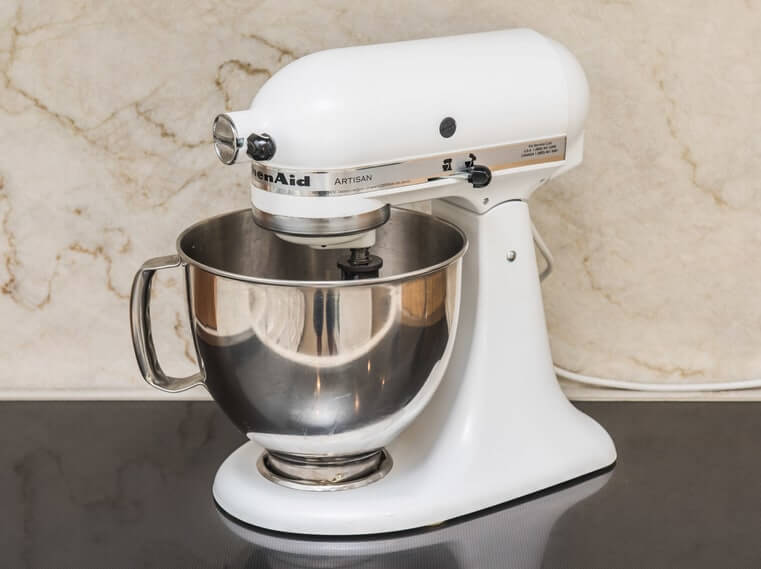 It is not a secret – most of us have our very own KitchenAid mixers on our counters.

Baking enthusiasts use them to whip cream and eggs. Those who hate to bake can still use them in their daily cooking tasks. Since they save us a lot of time, they are undoubtedly a staple in our kitchen.

Unfortunately, there may be a time when your Kitchen Aid mixer is not running smoothly. This can be very frustrating and may even cause you to worry. After all, we use them to prepare our food.

One of the most common issues users encounter is a mixer that is leaking oil. Why is this happening? Is this normal? And is there anything you can do to stop it?

Why is your mixer leaking oil?

Did you notice a small amount of grease leaking in your mixer? If so, there is no need for you to worry.

According to an official statement by KitchenAid on their website, a leaking mixer is totally normal.

Since mixers need to have grease to do their job properly, the manufacturer made sure to include an oil supply to each mixer that will last for a lifetime. Hence, you do not have to refill them every now and then to make your mixer run smoothly.

Why oil is necessary

The purpose of the oil is to lubricate your mixer’s gears when you use it. This allows the mixer to operate smoothly without any hiccups.

The process happens when you turn your mixer on, as this is when the oil spreads on its gears to lubricate them.

The reason behind the leaks

For the months and years that we use our mixers, there may come a time when the oil separates from the solid grease.

Not quite the baker or chef?

If you leave your mixer unused for quite a time, you may encounter some problems with it later on.

In this situation, if your mixer is unused for quite a time, the solid grease inside melts and the oil will separate. The oil will then make its way in the crevices of your mixer until it gets into the levers and controls.

Do you spend hours and hours in your kitchen to prepare your food? Sadly, this may be too much for your mixer and may cause it to overheat.

When your KitchenAid mixer is overworked, the grease inside will also be affected. Just like how the oil can separate when unused, this can also happen for overused machines. As with other things, using an appliance too much will never be a good idea.

Are you using your mixer for tasks that are way over its capacities? Although it is indeed tempting to use your trusty appliance to do things aside from whisking and whipping, this is not a good idea.

If you really want to go beyond the limits of your KitchenAid, just do so in case of emergencies. Doing this often makes your mixer too overworked that it will eventually have serious damage.

Do you live in an area with a hot climate? This may be the reason why your mixer is leaking in the first place. If possible, store your mixer in a well-ventilated part of your home, especially if it is summertime.

When using your mixer on a hot day, let it cool down if you need to use it for a longer time.

What if your KitchenAid is just newly bought?

If your mixer is new and it is already leaking oil, the problem can be traced to the shipment. Most often, this happens when your mixer was placed sideways during transport, resulting in the oil leaking out of its controls or lock lever.

Should you worry about it?

As mentioned earlier, most oil leaks are normal, according to the KitchenAid website. But what about the oil itself? Since we use our mixers to prepare our meals, should we stop using them when they leak oil? Will it make our food toxic?

Thankfully, the answer to this is no, you should not worry about your meals when your mixer is leaking oil. Since KitchenAid already recognizes the possibility of the appliance to leak, they made sure to use food-grade oil. This means that when it does leak and mixes with your food, it will not be harmful to you and your family.

Unfortunately, you may notice some discoloration in your food once it comes in contact with the oil, especially light-colored ones such as potatoes. However, rest assured that consuming it is 100% safe and the continued use will not damage your machine.

Where to find oil leaks

Do you want to inspect your mixer? You may see leaking oil in the following parts of your appliance:

If you only see minimal leaks or drops of oil on these parts, replacing or fixing your mixer is not necessary.

When you need to worry about it

Although the leaking oil is proven to be safe even when consumed, there are still some signs of a more serious problem that will need your action.

If the leaking oil is too much that it drips in higher amounts, you may need to have it serviced. The oil has its very own important function, and if it is no longer sufficient, this can cause some issues with your mixer.

Since the grease lubricates the gears of your KitchenAid, you may hear a grinding sound when it lacks oil in its system. This makes your appliance work harder and then causes it to overheat. In some cases, this can even stop your mixer from working smoothly.

What you can do to stop your KitchenAid mixer from leaking

Solution #1: Take it to a service center

Do you live in the United States? You can try sending your appliance to their repair facility.

Solution #2: Fix it yourself

If you live in an area outside the United States, the only option you may have is to fix your mixer yourself. Just remember that doing so will definitely void your warranty.

Where can you buy parts?

Call an authorized KitchenAid service facility to buy internal parts when you need them.

Removing the rear cover of your mixer

Step 1: Unplug your mixer from the wall socket

If you used your mixer beforehand, make sure to unplug it and give it a couple of minutes to cool down.

Using a Philips head screwdriver, remove the single screw that keeps the cover secure. After removing the screw, remove the cover and place it aside.

Located under the rear box cover of your mixer, pull the strain relief of the motor’s power cord.

Also called the beauty ring, you can remove it by tilting the head of your mixer upwards first. You can use your flathead screwdriver to easily pop the ring off.

To access the gearbox later, the only thing that keeps us out of it is the planetary pin. Use a hammer and a pin punch to gently remove the pin.

Step 6: Take out the planetary

Pry the planetary using two flathead screwdrivers and your fingers.

Step 7: Unscrew the motor housing from the stand

Once you removed the planetary, you can see that the gearbox itself is held back by five screws. Unscrew them all using a flathead screwdriver. After this, remove the four rear housing screws that hold the mixer stand and hosing together.

Note: It is important to take note that in the rear housing screws of your mixer, one will have a retaining washer in place. Make sure to remember which side contains the washer so that you can return it in place later on.

Lift the motor housing to separate the upper half to the bottom half part of your mixer.

Scraping the old grease off

Now that you can see your gearbox, you will see the dark, old grease on its surface. Use a putty knife to scrape them off and place the old grease on a box or container.

Insert a pin punch on the bottom of your mixer’s gear shaft to scrape all its nook and crannies.

Using a clean putty knife, dab new grease to your mixer’s gears. Try to match the amount of old grease that you removed earlier. Turn the gears using the pin punch method to equally distribute the grease in place.

Gently line the upper part of your motor housing to its bottom part and place it in position properly.

Make sure to place the washer in its right place and return the screws securely.

Apply a dab of grease to the planetary gear before placing it back in its location. Align the holes to secure the pin in place.

Make sure to wipe the area around the planetary ring to free it from the grease before replacing it.

Replace the strain relief for the power cord by wiggling it in place and then return the rear cover back. Use your Philips screwdriver to secure the screw.

If you do not rust your MacGyver skills and there are no KitchenAid factories near you, you can always hire a technician to fix your mixer for you. Just make sure that they are highly trusted, skilled, and reliable.